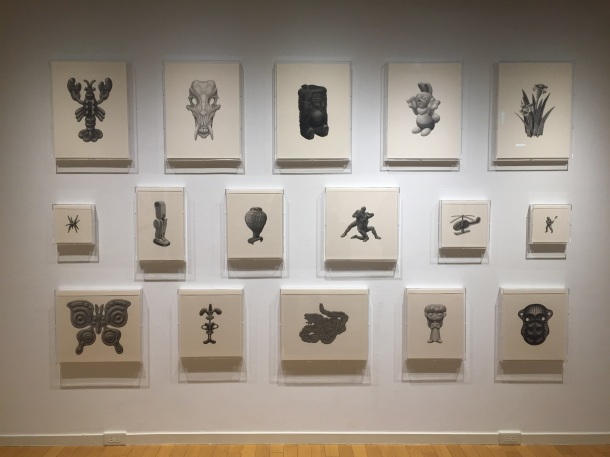 Meticulously rendered observational drawing carries a certain appreciative respect in the same way that finely carved figurative marble sculptures do. The attention to detail and focused labour required to execute them well is of an Olympian order, so the residue energies of that effort imbues a certain power into the work. This potency exists in the work of Kohei Sekigawa but there is something more psychological, sociological and pseudo-scientific to his wonderful suite of pencil drawings than the straight-out respect for beautifully crafted imagery.

Notably, while the majority of the drawings are images of recognisable objects – toys, tribal objects and botanic forms – it is all completely intuitive and imaginative construction. These are not observational drawings of actual objects but rather conjurings of mental versions of such objects. They are so realistic, and so instantly associable to the things they purport to represent, that you begin to question the veracity of the artist’s memory for such things. And then of course, start to wonder why this question would matter and before you know it, you’ve gone from an apparent carbon transfer of an object in the real world (toy, plant, mask), presented as an object in the real world (art), and veered inside the playground of the artist’s mind in a curious examination of his intentions and his inner-visual and archival capacities.

On the one hand the art, through its choice of medium (pencil) and singular subject focus (all white space around the object), speaks almost directly about the world and how it is seen; and on the other hand, the process and actual (rather than indicative) subject matter, speaks of the mind and how it sees inside itself, even lives inside itself. Is the world only ever really an internal psychological reimagining of the reality outside our bodies, based on assumptions and fleeting sensual data delivered confusingly to our contemplation? 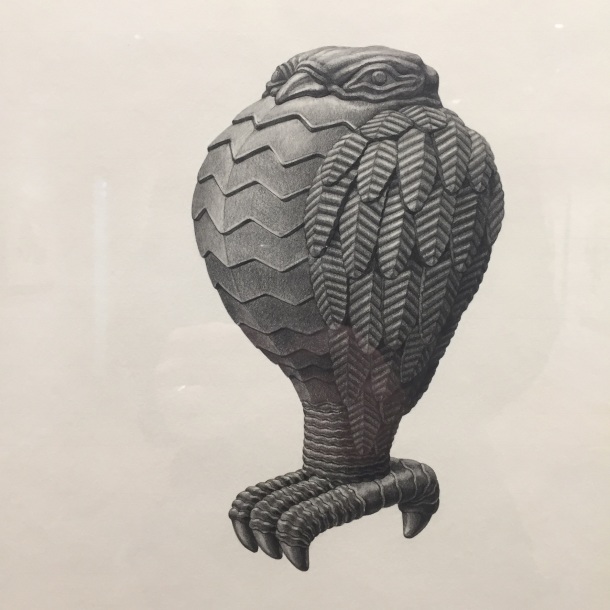 SEKIGAWA, Kohei, drawing from Figure / Out (2017), at Guardian Garden Gallery

Of toys and tribal artefacts and biology, one might propose that we are in the realm of anthropological investigation. The objects read equally comfortable together, as imagery of physically material things. Toys are the first cultural objects we learn to examine, decipher and interpret with any real intensity. Tribal artefacts come loaded with colonial baggage and a double-edged sword of longing and patronisation among those who claim to be ‘advanced’ civilisations. Botanic illustrations marry some of that colonial baggage with a scientific embrace of the natural world, that perhaps also wields a twin longing and patronising emphasis upon its subject. This is a triumvirate of curious subjects that, thanks to an even-handed formal manifestation in drawing, frees the associative links to wander and raise interest questions. And because they are not images of ‘real’ toys or ‘real’ plants or ‘real’ tribal artefacts, these musings raise another layer of complexity that enriches the experience of consuming them.

There is also another series of work that is more abstract and equally compelling, forming an intriguing partnership to the realistic works. Looking quite a lot like the carbonate residue of candle-flames they are highly evocative formal configurations that trigger a multitude of associative interpretations. Are they burnt or, upon closer inspection, are they watery liquid stains? They also bring to mind Chinese scholar rocks, or more appropriately for Tokyo, suiseki – which are naturally occurring stones or rocks with a pleasing aesthetic quality. Reinforcing the artist’s contemplative and intuitive image generations, looking at this suite of work is not unlike staring into a fire, looking at a waterfall, or meditating on the qualities of a natural rocky outcrop. They are rendered with on less precision that the realistic works, but because they don’t pin down to a specific material origination, how can we know that the texture is accurate of its apparent subject?

SEKIGAWA, Kohei, from Figure / Out (2017), at Guardian Garden Gallery

In time, the resemblances and associations being to emphasise notions of process – fire and flowing water move fast and are difficult to pin still even in photography let alone your mind’s eye or your intuitive pencil mark-making on paper. Rocks, however, are still … or are they? Enough stillness of the mind will provide the space required to start mapping out the fluid transitional moments of a rock’s life and its impending possible futures. No thing is ever still, nothing. Not even the admirable attempt to lock thoughts down on paper, no matter how beautifully executed.

It is for these sort of catalytic responses that this show exceeds its initial beauty and offers up something special beyond the paper.