Explosive fragmentations of occupied architectural boundaries spill across planar surfaces. High octane momentum is captured in an apparent occlusion of both time-lapse elongation and freeze-frame immediacy. Artist Yukari Bunya manages to channel futurism, axonometrics and intuition in her wonderful suite of drawings exhibited at Gallery Jin Projects at the 3331 Arts Chiyoda complex, and in the process produces highly captivating work. 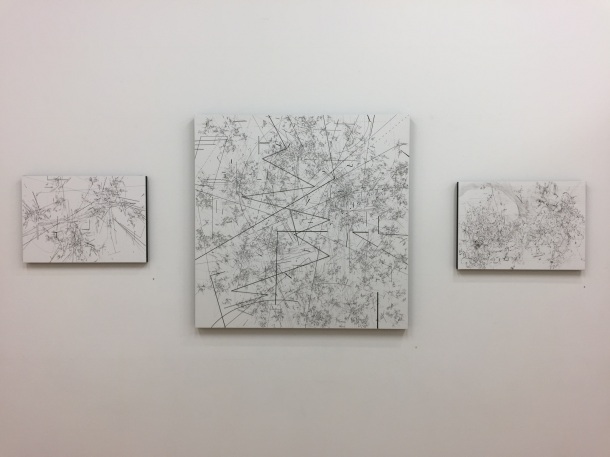 Generated by purely improvisational means, the single-colour drawings marry hard linear marks with arabesques, curves and looping threads. The finest of thin lines sit together with heavy solid ones, producing a secondary spatiality that overlays with a more perspectival one created by the verticals, horizontals and diagonals that hint at rooms, constructions and boxes. This interplay between near and far (afforded by line width variation) and perspectival space (afforded by architectural allusion) situates the drawings in a rich complexity of planar orientations for the viewer. It activates and enlivens what is, at face value, a flat white page with pen lines drawn across it.

The more organic elements read as durational drawings, as if tracing bodies through space in patterned motion and transfer. Loops, waves and clusters reinforce this sense and bring a feeling of grasping an action but never quite locking it down. It comes as little surprise that the artist studied music as these drawings look a lot like scores. They are compositional orchestrations of energy governed by semi-articulated parameters of timing and structure. Some of the more organic lines also read like text or logos or signs, imbuing a narrative quality and a communicative undertone hidden within the whole.

The assertiveness of the mark-marking is striking – linear lines are razor sharp and the organic graphological intonations are smooth and crisp. These qualities bely an intuitive form of generative mark-making and yet still feel completely free of a guiding principal beyond tracing the residual path of a highly attentive mind. It’s hard not to imagine that the artist bears down on the page with a forthright focus that would make the paper fearful of what is to come and yet confident its execution will be satisfactory for the effort.

Bunya’s work brings to mind Julie Mehretu and Mark Lombardi, and echoes notions of structure and the organisms implicated in the entropic frameworks of power that are evident in those artists’ works. There is a balance between the hard and the soft elements in Bunya’s drawings though, that render them more celebratory and joyous. The ominous character normally afforded imagery that hints at explosive destruction, or deconstruction, sits in the background rather at the forefront in these drawings. That feeling of an overlay of time-lapse and freeze-frame somehow leaves a warmer edge to the work. And the confident control of the lines puts the artist in charge of the generation and the outcome in a way that comforts the viewer in the knowledge that although everything is fragmented, there is an overarching articulation of its necessity and its finality, and that we are celebrated the partial within the whole because the whole is part of the partial.