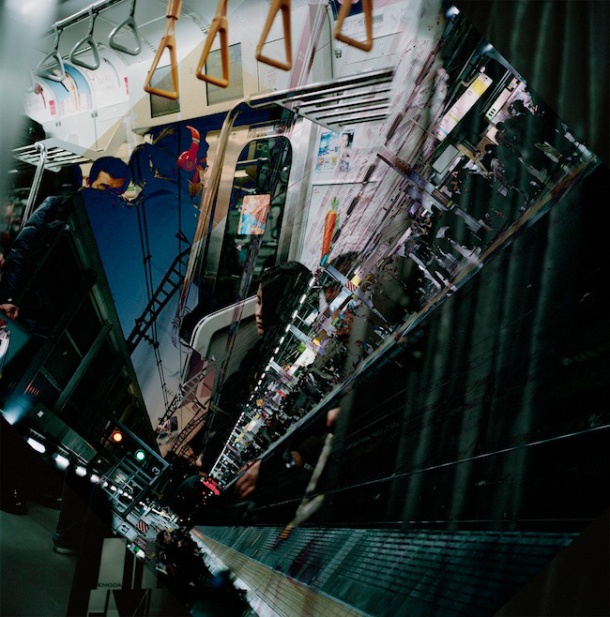 Organic forms blend into the technological, as planar fields conspire to throw weight through oscillations of time in Matt Mahdavi’s exhibition at 3331. His work is wrought upon itself in an imploding overlay of gravity and competing process. It’s like standing at the edge of a black hole as everything around you bends and distorts its way into the void, each element hybridising with its neighbour as it transforms into melting angels through the gateways of obsolescence.

Consisting of a series of highly polished photographs – dark and brooding nightscapes of Tokyo – together with an interactive sculptural component made from an old computer monitor and deconstructed digital hard drive, Oops, Something Went Wrong is a tight show with striking images and playful yet forlorn character. The interactive artwork consists of a series of 3.5″ floppy disks that can be inserted into a hard drive to produce images on the monitor. These images are predominantly documentary street photography that cover topics of banality and the everyday, with titles like This is what the stars look like; The girl on the train; No purpose; and 4 cones and no home. To say they are banal is not to say they aren’t interesting. They are full of longing for connection, commonly denoting an absent body and celebrating the unusual beauty in things that are overlooked.

The larger-format printed images consist of overlaid photographs, morphing a singular perspective point into a piercing array of space or cross-hatching cartesian plains, that at once disorient and comfort the eye. There is a search for life inside a machine, of wondering bodies in vast architectural landscapes, of glittering stars to be found in the silica of pavement and dust. There is a darkness that seeks the shadowy cracks while light cuts out from inside the void. A sense that a battle is a foot between something old and something new, between desire and distrust. But a belief that there is a beauty in their choreographed apprehension to meet and resolve their impasse.

With the interactive work, the requirement of the audience’s selection of disks to bring the images up on screen amplifies the feeling of connection that runs so strongly across the content of the show. While the photographic images that arrive on screen speak of absence and longing – an empty park bench by a seaside; a beautiful woman glimpsed through a train carriage door; an empty bed – the necessary action of the visitor to produce the work involves a human inclusion in the art. The bodily action of the audience inculcates its way into the work, putting living human bodies into the centre of the work’s existence.

The nature of the devices too, speak of corporeal realities. An old monitor, sitting directly on the floor, emits a nostalgic quality that intones the past and celebrates the historical. Living things get old and die. Sentiment is activated through a choice of monitor model from an era of early technological development. The hardware of the disk drive, pulled apart and pinned to the wall like a dissected animal, its veins and arteries fed across the space like intravenence drips, is also visceral. Its memory primed by the insertion of archaeologically ancient tools, whose clunky clicking and grinding sounds like the rickety bones of the antiquated and infirm, or of the worn and weathered cogs of a grappling mind.

Mahdavi’s exhibition is one that cleverly uses the technology of its process to filter the subject matter of its images in a way that allows content and creation to dance with each other. The longing for connection plays with the overlaying of images, touching two scenes together, interlocking two worlds and weaving two occasions of time into one space. The absent subject of representation is replaced by the present subject of participation. And the glittering stars of light and dust leave a final sense of optimism against a relentless march of dark skies, dark time and a universe devoid of human considerations.