One of the more creatively engaging aspects of curating is exhibition design. The physical manifestation of a curatorial project is the primary real-time interface between audience and artwork, and it is the point at which a curator has the best opportunity to generate or facilitate affect upon the central nervous systems of human beings. While curators must be mindful of the archival longevity of projects through dissemination in text and image, where artworks and their presentation will have visual, auditory and intellectual potency into the future, it is the point at which an audience experiences the presence of artworks in a shared space that a particularly affective connection can be made.

Exhibition design will entail as much, if not more, pre-planning than the actual placement and arrangement of artworks. Indeed, the very selection of artists, based as it is upon an awareness of their previous artwork production, is itself a form of design as it establishes a field of aesthetic and physical characteristics that will flavour the final configuration of a project. It won’t set it in stone or necessarily operate as a directive, but it will be part of setting the design in motion. Additionally, the selection of the venue will set parameters to the design and these early elements will begin to shape a project’s material outcome before any particular artworks are corralled into a space to sit beside each other.

Let’s turn our attention to that most final of design decisions, the configuration of artworks within a given space. This can be one of the occasions at which the distinction between an administrative curator and a creative curator, between hard and soft approaches, is perhaps most evident. This is of course a rather reductive and simplistic characterisation of curatorial practice, but for the purposes of drawing a distinction between philosophies of approach it helps to ascribe methodologies. For curators who also maintain their own art practice, or for curators who consider their creative output more akin to an arts practice in its own right, this moment of configuration is full of excitement, energy and enjoyment.

Each exhibition contains within it a variety of potential iterations. When there are multiple artists, multiple media forms and multiple rooms, the variations exponentially expand. Unless the theme of the show is to demonstrate that a body of work is an illustration of an idea, that the theme is the principal reason for a presentation, then the artworks themselves best determine the design. There will always be a temptation to bend the artworks to the will of a thematic concept. This is almost always a guarantee of suppressing the true strength of an exhibition and, somewhat paradoxically, undermines any original intent to communicate the original theme. The exhibition format works most effectively, and indeed affectively, in the pedagogical acknowledgement that an audience’s own illumination of thematic awareness is the most potent engagement of intellectual and bodily learning. ‘The curator’s job’ notes Dave Hickey, ‘is not to create meaning or to impose meaning on works of art, but to create the circumstances out of which meaning might arise’.

Where artists understand that illustrative expressions of ideas are the dialling- down of artistic integrity, so too curators must be mindful of concocting illustrative exhibitions. Of course there is a place for this on occasion, in which varying degrees of illustrative illumination is part of the premise of an exhibition, usually in historical or museological presentations. But for practitioners of contemporary art curating this is an almost certain diminishing of a project’s potential and a disservice to the artworks contained within.

Tension and balance are the twin anchor points for mooring exhibition design. Where most shows come to life is in the spaces between artworks. If we were to imagine artworks holding conversations in the absence of human interlopers in their space, it is the character and quality of this conversation that would set the tone of the exhibition. This is, however, merely tone and not a fullness of the exhibition character. For it is the interloping human bodies that ultimately and finally conclude the networked reality of the relationships between artworks, architecture and audience. And it is here, in all of these sets of relations firing like synaptic tendrils, that the curator will endeavour to provide the right conditions for both tension and balance. 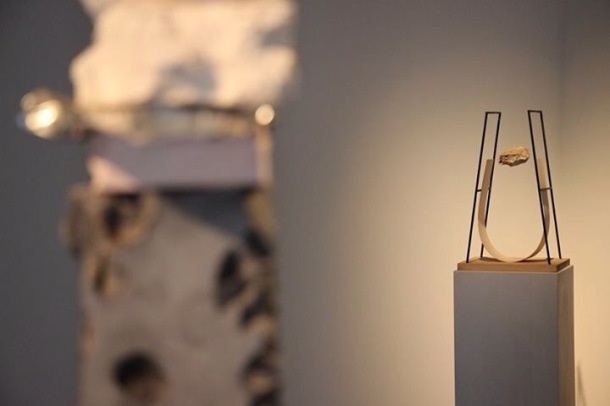 The exploration and attentiveness to these features will lead a curator to a mindfulness for composition. Whether you consider curatorial practice to be akin to an art practice, or you see a curator akin to a conductor, a dj or an administrator, compositional concern is a principal tenet. The physical arrangement of artworks in a space becomes very much an exercise in compositional dexterity. Formality – in terms of the placement of forms in relation to each other – cannot be overstated or neglected. In fact, the acknowledgement that exhibition formation contains an element of design gives the clue to the significance of formalism. One could certainly posit that there is an art to presenting a good exhibition but you cannot escape that there is also an interface of object and human governed by use value, and here we find ourselves in the design field. This is intrinsic to an exhibition in a way that it is not in an artwork. And it is this characteristic of use value, while not necessary the entirety of an exhibition’s reason for being, that evinces design as a feature of exhibitions.

Certain considerations come to press upon a curator’s attention to varying degrees with each new project. The vagaries of artworks, architecture and audience dictate the level of importance placed upon them, but there is traffic flow, sight lines, lighting, site-specificities, power sources, architectural materiality, labelling and so much more besides to consider. Let’s just lift the lid on a few of these as a way of exploring their influence on design.

Traffic flow is the way in which an audience navigates its way through a space, or spaces. The more familiar one is with a given space and the history of the different sorts of shows exhibited within, the more likely one is to predict the way in which people will move through the space. It’s not unheard of for a curator to be aware of studies in retail and marketing that inform knowledge about the placement of objects in architectural spaces and how one might expect people to navigate objects in space. There is a reason, for example, that products like milk and butter are placed at the back of a supermarket. And while it may be anathema to some in drawing comparison between gallery layout with shop design, research and experience in this field does provide food for thought. A consciousness of traffic flow will influence the way in which a sort of narrative knowledge might play out. It will influence how one might design spaces for pause or moments of surprise. And it might help set the sequence for building a case based on meaning or accumulated sensation.

Sight lines are related to traffic flow and they are ways of thinking about compositional accumulations. If a viewer witnesses several works within their line of sight, they will be digesting an assemblage of art and be more attuned to the relationships between them and the culminated meaning or feeling that comes with a grouping of artworks. Sight lines also work to cut spatial relations across the expanse of a room, like drawing lines on a page. It can be a particularly strong way to map a space, to fix points within a field. There is an opportunity for relationships to be established between artworks through a careful positioning of objects, flavoured by the positioning of the viewer. One of the most enjoyable aspects here is the consideration of sight lines for a viewer on their way into an exhibition, and how they might come to witness the unfolding of the artworks in a show, and then on their way out of an exhibition as they re-view the works they have been introduced to in reverse order.

Lighting is something that could well be one of the least discussed and least appreciated elements of design. There are fairly standard practices and approaches, and in many cases certain ‘house styles’ or ‘signature styles’ that are wedded to venues and curators. There are lux levels and UV levels that must be considered, at least at the museum level when curators must be more mindful of artwork longevity and posterity. Some artists will be more attentive to this than others but most will not have strident opinions on lighting. Lighting does, however, provide a significant influence over the ambience of a space and therefore the atmospherics of an exhibition. Again, to draw from other fields, one might consider the reasons why cinemas are darkened, restaurants are candle-lit and offices are flooded with fluorescents. Venues with multiple rooms offer expanded consideration of lighting control, natural lighting apertures limit controls and viewing times will influence decisions in this regard. On this latter point, it is not uncommon for a gallery to have its majority attendance at an opening night event and yet have its show lit for the daylight hours that it will be open for the majority of its run. But for every controlling limitation there comes a character that one must consider in the same way as other architectural limitations.

These are just a very few of the considerations at play but it will always be the artworks themselves that will be the principle drivers of design. For it is their composition that sits at the very core of the show, their selection that in fact makes this confluence of forces an actual exhibition. In all approaches to the design of exhibition it serves the curator well to be mindful of the artworks’ own force and ambience. It has arrived at a given space for a whole set of reasons and finds itself one step away from its activation in the triangulated network of artwork, architecture and audience and its beholden on the curator to facilitate this final transition rather than impede, dictate or illustrate it.