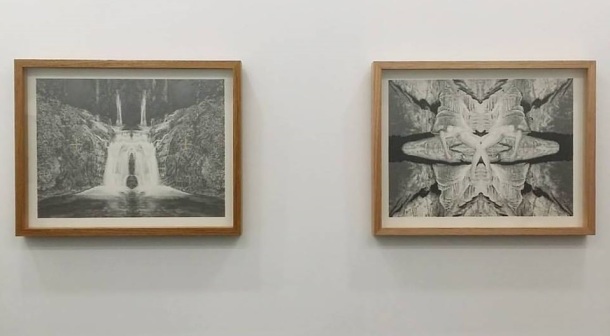 The Romans practiced Augury by observing the flight of birds. When the omens were good, the battle was begun, or perhaps the new bath-house was opened. Prediction is a fun game.  I spent many years working as a forecaster for a government department so I developed a very modest skill in recognising and interpreting omens.  James Little and Ben Aitken have obviously been craning their necks in recent months as they prepared Melbourne’s newest ARI space, Nicholas Projects. Their first show is called Inaugural. This term brings together the ideas of augury and also of installation. This show invites us to prognosticate, to make assessments about the future based on the works presented and the curatorial decisions leading to this show.

Perhaps it is telling that the room is dominated by Robert Hague’s “Shutdown”, a sculpted bust of a human figure draped in cloth. This exquisitely carved work is marble, a material and technique that connects us with the sculptures of antiquity. The veiled figure is itself a particular subgenre of sculpture particularly popular in the 18th and 19th century, prized as a demonstration of the sculpture’s skill. These works were also tantalizing as the obscuring cloth only served to heighten the awareness of the suggested features beneath. The brain is marvellous for constructing hidden details and in the world of forecasting it is important to be aware of this tendency – to make unwarranted assumptions in the absence of solid data. And yet forecasting also relies on some level of intuition – we must try and somehow feel into the future without perfect data. In this context we can see the drape as something like a blindfold, Hague’s figure cannot see what lies ahead. Like justice, art is blind. The drapery is fastened with a brooch carved with the widely understood symbol for an on/off switch. Hague’s piece is a highly worked representative sculpture, a mode which invites the viewer to enter the world portrayed. Would the button open the drapery? Perhaps the figure is some kind of automaton that would be activated by this switch. Or perhaps, in keeping with the augury theme, this is a representation of some being from a distant future where such current symbols have become detached from their original functional meaning and have become traditional decorative motifs. In a way, Hague’s act of producing this work makes it a self -fulfilling prophecy. 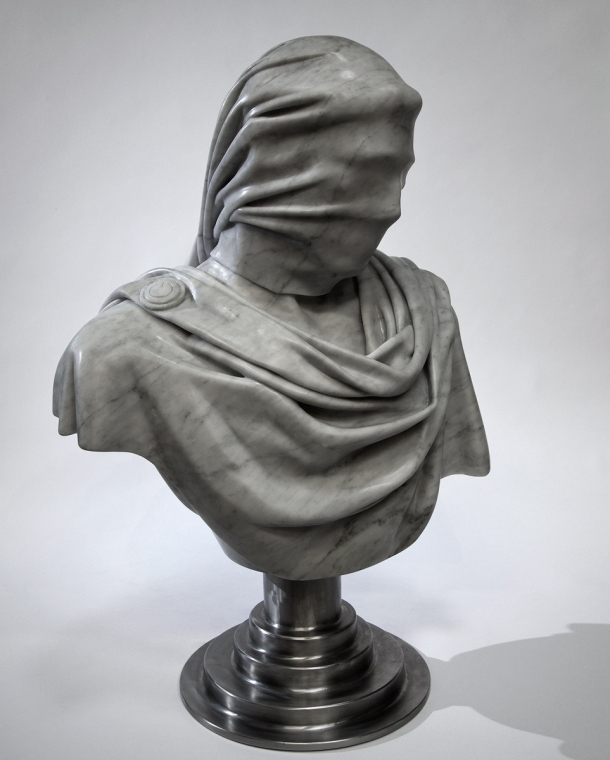 Becc Orszag’s “Immaculate Landscape VI” reflected landscape offers another take on the notion of prophecy. The genre of landscape in visual art has, in many parts of the world, preceded and informed the physical landscape. From the 18th century, garden designers in Europe, America and Australia emulated the visions of Dutch Italianate painters and the heroic vistas of Romantic painting. The paintings that inspired the landscape designers were often fantastical constructions, based on no real geographical location.  In a way, the constructed landscape paintings of the 17th and 18th century functioned as predictions of the physical world.  Orszag’s symmetrical images suggest a doubling of reality – an image of the world that predicts itself. We could interpret this as a kind of time-reversible prediction, as we might find in classical physics. Of course, we live in a world with thermodynamics  and quantum effects-not somewhere perfectly time-symmetrical. Orszag’s work is drawn and close examination would reveal that it too is not somewhere perfectly symmetrical. There are variations – the weight of a mark here, a nuance of shading there. But this would have to be a very close examination because Orszag’s work is detailed and skilful.

This skill itself speaks of the progress of time. Both the time taken to develop the ability to produce a certain type of very technical drawing or painting and the time to produce the actual work. Bieniek’s work, “Helenium” amplifies this feeling even as it draws the viewer into contemplation of a physically small space. Bieniek’s painting are so effectively illusionistic that the draw the mind of the viewer into the virtual space conjured by the painting. The size of Bieniek’s is relatable to the size of a smartphone screen. I am familiar with the sense of losing time inside one of these devices. I am not so familiar with the sense of looking at the screen of my phone. This distinction operates with Bieniek’s paintings – I do not look at them as much as project myself into them. Svetlana Alpers discusses the idea that 17th century Dutch painters created, and believed in, a kind of alternate reality conjured by their brushes. The idea of a reality conjured by an act of artistic creation has been a recurring theme in literature an film, but only from the end of the 20th century has the idea of virtual reality taken hold as a feasible and, maybe, even appealing place to spend time. This is the near future, or perhaps the futuristic present that Bieniek’s painting seems to allude to.

Tristan Jalleh’s video “Androids Dream” is an interesting step in Jalleh’s exploration of science fictional tropes. This work alludes to the Philip K Dick story, of course, and in this video work Jalleh plays up the film noir associations Scott brought to the film adaptation. The short loop in this video, might be the titular Android’s dream, or the title might be a statement of fact. The stationary figures might be the androids. We might imagine that the figure represented in Hague’s sculpture has been shut down and now, along with its cybernetic colleagues, is standing asleep as the repetitive traffic of the post-industrial world moves past. Bladerunner references inevitably call to mind replicant Roy Batty’s “tears in the rain” speech which framed hyper-futuristic scenarios as moments which would poignantly vanish with the mortal memory of the replicant bio-robot.

Franco’s video work, “YOUR DOOR” on the other hand, offers the ultimate human perspective. Franco is a master at showing the absolute present moment in all its strangeness. If it offers a sense of augury, or prediction, it is that our society will continue to be strange to us. Indeed Franco’s work underscores the fact that the strangest relationships are the closest to us. The people we know best are also the people who become least familiar to us, As Timothy Morton pointed out in “Thinking Without Nature”, the strangest person is the one we wake up with every morning.

It is apt that Franco’s work is included in this show at this time, since as much as the exhibition deals with the future, with speculation and with the anticipation of time passing, it is a cultural space that will absorb and reflect the society it is presently in. In doing so, it will shape society in turn, even if it is in a small way.