Robbie Rowlands, ‘The fountain be still’

Robbie Rowlands, The fountain be still (2013) _ image courtesy of the artist

Life is not lived in linear sequence but in harmonic echoes and repeated refrains. Reaching across the expanse of time and place, our memories mingle ephemeral recollections with material presence. The objects that surround us on this journey carry with them the memories of their use and the character of their engagements with the living.

Robbie Rowlands works with everyday objects and the context of site. In this work, The fountain be still, the artist has drawn together family history, cultural objects, and architectural and audience position to produce a highly evocative network of relations.  The two pianos sit centrally in this network, lying on their sides with their inner workings exposed. Large upper sections have been dissected and arc across the space of the drawing room as if reaching to meet.

The singular objectness of the piano – the musical instrument as a confined, contained and recognisable object – becomes fractured and explodes beyond itself. Exposing the interior reveals the mechanisms that drive its ephemeral outputs. The laying of the instruments on their side renders them alien, discarded and oddly vulnerable. The creation of music that fills the room in invisible sonic waves is made apparent in hammers and strings and the arduous mechanical reality of cause and effect.

Rowlands has taken these two instruments and altered them to play a new way. Make no mistake, the artist is indeed playing the pianos as instruments, just not in the way we are familiar with. Where music can be said to exist as much between the notes of a composition as with the actual notes played, so it is with the work here. We now have both the vestige and the recalibration of organs. Exposed, positioned and implicating the functionality of internal and external relationships.

The Chaffey family history and heritage of this building play their part in the networked composition. The two Chaffey wives, cousins and each named Hattie, form the underlying motif upon which the work builds. The burdensome history of the first Hattie’s death in childbirth, and the second Hattie’s death of a child through drowning in the fountain – from which the title is derived – forms a sombre foundation for the work. To cut across time, to dissect a situation and to unravel a problem – these notions swirl about the room, released by the very physical and haptic incursions of the artist upon not only these objects but upon the histories tied up in this place. The idea of an intercision seems fitting here too, where a cross-dimensional tie is severed, releasing a soul from its bearer. Fallen on one’s side, devastated, unable to operate, rendered asunder. And in that final moment, a single holding note sustained and quavering, a connection sought across space and time. A meeting point of connection left incomplete with the audience implicated through its participation. If a tree falls in a forest, if a piano falls in a drawing room. 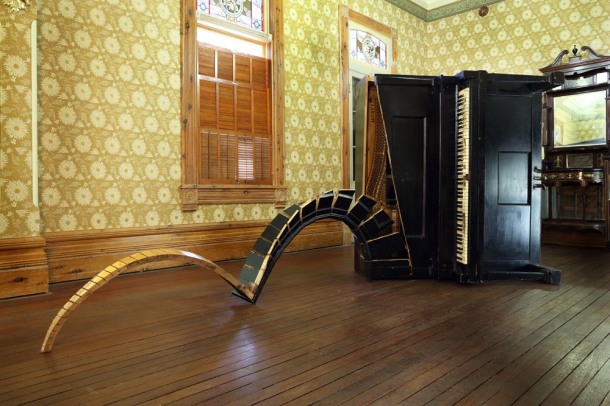 Robbie Rowlands, The fountain be still (2013) _ image courtesy of the artist

Beyond the weight of history and the melancholy evocations of dismantled functionalities, there is also a playfulness and freedom that lifts the work and proffers hope. The artist’s act enlivens the worn-out objects and breathes new life into their very instrumentality. Expanding beyond their limitations the pianos develop limbs with which to reach. Perhaps rather than stranded on their inert feet, pressed against the stability of the walls and subject to their interaction with human hands, they are broken free – not broken. They crawl toward a shared recognition. Disassembling themselves from their designated function and move forward. Seeking out new relations as if the playing out a duet. A dance to supplant a soundtrack.

Rowlands’ choreography of object, history and place is finely tuned and carefully executed. Beginning with the binds of family and the mirrored relations tied up in this very particular human drama, the artist has both married physical form to that narrative and marinated the form in that narrative. His labour is at once the act of cutting and the act of binding. The chosen venue in the drawing room both cushions this relationship and amplifies it. And yet his incursions into the objects, by way of his unearthing of histories, is not the end point of conjecture but its foundation. In the end it is the objects themselves, in this room, that must relay their own intentions and deliver their own provocations. Their shared similarity in shape, their different colours and their variously worn down keys begin to unravel their own meanings – meanings specific to this work that fly free of early foundations. The artist’s particular process of cutting, of extracting component parts, and yet never fully extracting them, tells a particular story itself. The segmentation of sections, the intervals unitised and rigidities made malleable. All these are notes that are set loose in a jazz riff of semi-improvised articulation. I’ve enjoyed finding my own way through these harmonic echoes and repeated refrains, guided by objects of contemplation, and I hope you do too.