‘Please allow me to introduce myself’ 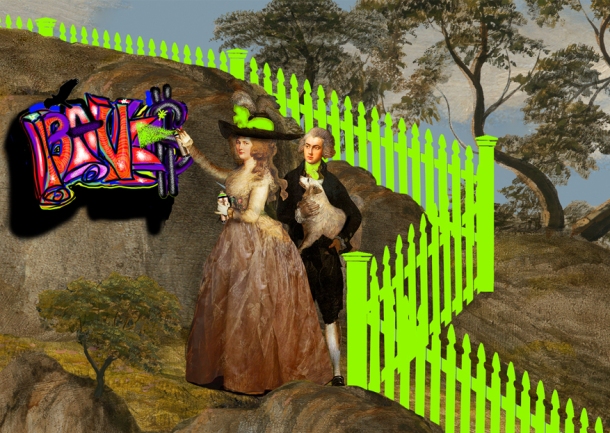 Curated with the precision afforded a well appointed garden, ‘Please allow me to introduce myself’ is a tightly choreographed collection of art specimens. The title itself neatly marks out the territory, a field of play within which the artists explore the idea of an environment invaded. The introduction of a new culture and its attendant accoutrements into an island continent spared from the onslaught of industrialisation and colonialism forms the background context and underlying foundation to all of the works. The manicured, the violated and the destroyed are all celebrated to varying degrees. A mix of media allows for multiple ways into the theme and there’s a spectrum of approach ranging from the humourous to the horrific.

Juan Ford’s work is particularly striking it in its simplicity. What at first appears to be a dead tree, fallen prostrate against the gallery wall, reveals itself to be a totemic and martyred multi-victim. Sections of plants have been cut up and stuck together with hardware joints and screws – different plant species connected together as one. Splayed up the wall, pinned and hinged like a crime scene reconstruction, the tree is a vessel of every tree fallen. Fractured, broken and remade, it’s equal part human intervention and archival history of organic growth.

The video work of Joan Ross builds a set from the colonial picturesque and populates it with a truncated narrative starring noble savages and the territorial pissings of the bourgeoisie. Appeals to the lost originality of the virgin landscape are dismissed in even the earliest attempts, where the native eucalypts become distorted and foreign in the vision of John Glover. The introduction of the European eye instantly affecting the land and paving the way for picket fences and traffic controls. Joan’s humourous approach couches the darkness and allows us to think beyond the immediate beauty. A rococco wench sprays Banksia on a granite boulder and ties threads across a sea of referents.

Natalie Ryan’s flocked animals hover between an innate attraction to cute creatures and a despair at the sport of death. The velvety tactile surfaces of her animals yield a haptic urge that turns to repulsion as you catch the eye of the haunted beasts. Pretty in Pink, a deer’s head sport-mounted on the wall, best captures this oscillating effect. The colour slips and slides between joyful playtime and subcutaneous nightmare. You want to hug its soft neck one second, and avert your gaze from its exposed innards the next. The black hare in the corner is a shadow of its own making, lurking inside its own luscious surfaces. At the heart of the forms are introduced species, cast into the wilderness for the purposes of hunting. The consequences of that action upon the environment, let alone what they say about our relationship with animals, drive a dark edge to the beautiful work.

Anne Marie Graham channels Henri Rousseau in her painting, View to Bromeliads. It’s a virtual surrender to the human urge to seek pattern, order and regulated form, best represented by the gardener’s conceit. Leaves turn flush up against the picture plane like pressed flowers. Cottage gardens like these are lessons on aesthetic appeal, all the while breeding beasts that turn loose to run with rabbits and cane toads and foxes and goats. And speaking of running loose and pressed picture planes, Gregory Elms delivers us a heightened close-up photograph of a red fox, as if only recently scraped up from the side of the road and scanned on a flatbed scanner. We look into its eye as if we are the road itself, or the landscape upon which it has wrought its wanton destruction. A sick pleasure in its death under the wheels of our ceaseless expansion.

Liam Benson’s semi-camp video in which a man in drag – part-indigenous tribal outfit, part Victorian-era farmer’s wife – runs with increasing intention towards his prey rounds out the set of artworks. Bearing a weapon and traversing a varying rural landscape he finally brings down his quarry and we learn we have gone from voyeur to victim.

The works all stand on their own, for all their own reasons, but as a group they gather a sort of critical mass around the theme. Allowed to sit equally in the space they converse evenly with each other and present a well articulated expression of the idea underlying the show.

Can’t wait to see what comes next at Strange Neighbour.