A day visit to the Museum of Old and New Art (MONA), 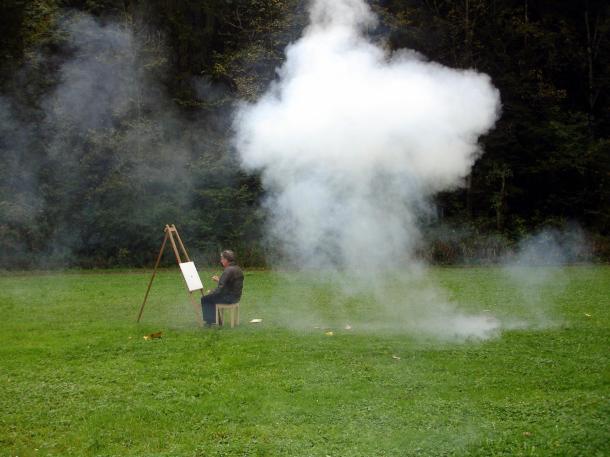 I’m sitting in one of those Louis XIV style replica faux posh armchairs staring at the giant sandstone wall on the bottom level of MONA and marvelling at the sheer majesty of a cut stone surface the size of a perpendicular-facing basketball court. It’s all too easy to look at something as monumental as that and wonder how the fuck a few colours splashed on a piece of fabric is going to compete for my attention or my appreciation. The Bond-villain architecture of the museum is a potent impression to overcome. It’s my second visit to MONA and still my eyes are magnetised to the variously yellow striped gorgeousness of the underground layers of compressed sand.

But there was plenty of amazing pieces of art to captivate me and keep me enthralled for hours on a sunny spring day, deep underground in Hobart town. For anyone even vaguely familiar with MONA you’ll know of its vast mixed collection of Mesopotamian artifacts, Roman silver coins, YBA painting, Australian contemporary sculpture and just about every representation of nation, culture, medium, movement and art ‘–ism‘ ever created, lauded and denounced. As a second visit the main objective was to seek out anything new and cast my eyeballs over old favourites. For the purposes of sharing the experience, I’m going to single out just a few of the works that really made an impact on me and leave the rest aside for now.

Roman Signer’s video work Punkt occupied a small section of wall next to a great work by Australian Cameron Robbins, which was sitting disconcertingly still and full of potential disquiet thanks to the incredibly amazing weather outside. The video piece went a little something like this: in an open green field with a backdrop of trees, an old man walks rather gingerly toward a canvas resting on an easel. He sits down at the easel and dabs a paintbrush into a tin of black paint. Lifting the brush to the canvas, he stops just before the bristles make contact and he waits, poised. A few metres behind him a small box begins to smoke and sizzle. The ghostly vapours waft toward him on the wind. !! BANG !! – the box explodes, the old guy flinches forward and the brush bumps into the canvas. Et voila – two works of art produced simultaneously, a painting and a video piece of the process. Oh, and the laughter! There’s something joyfully hilarious about watching an old man shit his pants at the shock of an explosion. (Although, I should be clear to say he doesn’t literally shit his pants because, again for anyone halfway familiar with MONA, that sort of thing isn’t out of the question here). And even though the punchline is evident and expected, I found myself watching it over and over and giggling like an idiot each time. Simple, joyous, art.

Ryoji Ikeda’s data.tron is a tempest of cascading information graphics, a binary data storm, and a cinematic macroscope of awesomeness. If ever there was a chance to compete in terms of scale with the interior sandstone cliff – this is the piece to do it. On one side of the room, a huge projection matching the aforementioned perpendicular basketball court proportions; on the other, a series of smaller domestic-scale projections of various data representations. Flashing, pulsing and surging visuals, predominantly white on black, are accompanied by glitchy beeps and grinds – more than a simple sonic accompaniment but an equally present component of the entire piece. The term techno-sublime gets bandied around a lot these days and this work is perhaps the quintessential artistic expression of that idea. Standing next to a waterfall of alpha-numerical hieroglyphs tumbling off the wall and falling across the bodies of the audience renders the human body a dwarfed micro-component of our own generated cacophony of information. The sound-bleed of the piece, eeking techno-blips throughout the museum, sends out a subtle and constant reminder that the deluge of monitored and recorded data flooding through the channels of our exponentially expanding hive-systems is ever-present and more-than-slightly ominous.

And then, from the sublime to the ridiculous: Carrot–shaped Stick by Sam Porritt. The title pretty much gives you a decent handle on what’s going on here. Although, actually, there’s two sticks. And they’re joined by a long piece of twine. One stick leans vertically against the wall, twine bound to the centre and leading up to the ceiling where it’s tied to a hook and drops down to the second carrot suspended horizontally at head-height. Of course there’s the play on the idea of the carrot and the stick, truncating the two opposing motivational techniques into a singularity that renders them ultimately impotent. Tied together they sit at opposing ends of a connection and yet mirror each other in a closing loop of reference. Much of the energy in the piece is transmitted from the carrot-shaped sticks themselves and sits heavily in the seemingly innocuous connecting thread. 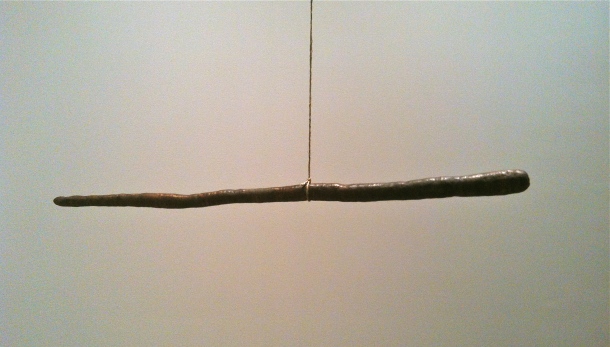 Following a full day’s exposure to the magnitude and quality of art contained in MONA it becomes an exercise in recovering and rediscovering memories of artworks that surface only with encouragement, or randomly and unexpectedly like lost conversations from a party. A photograph of a bullet-wound in skin by Mat Collishaw that looks not unlike a marsupial pouch; a secessionist style/psychedelic painting by a pathologically shy Russian called Dasha Shishkin; a possum silhouette made of rope sitting out of frame and barricading a self-contained section of a larger wall work by Yves Netzhammer; and a four-thousand year old cuneiform with the most brilliant triangular writing script etched into it are some of the works featuring on high rotation in the memory-bank highlights reel of the visit.

I finished the day under the blue sky, lying flat on soft green grass, watching a peacock flash its extravagant display at its intended mate. With the memories of the artworks swirling in my mind this vibrant biological happening was coaxing out the notion of sexual selection and its relationship to natural selection, and without putting it all together until discussions much later, the theory of the Red Queen all suddenly fell neatly into place.