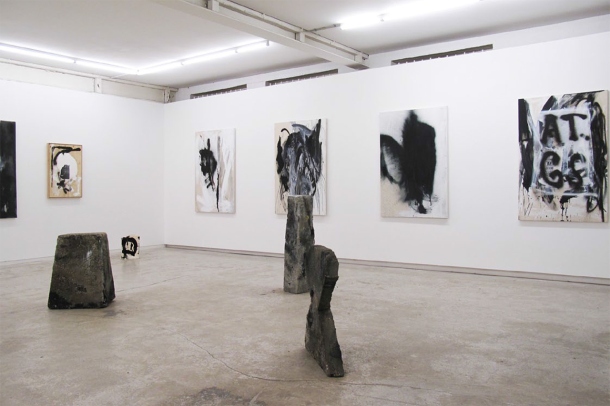 On a colour control setting with only three dials – black, white and beige – Misha Hollenbach somehow manages to crank out an unnervingly discordant symphony of harmonic rhythms that I could quite happily have bathed myself in for hours. Part ceremonial aftershock, part inscripted artefactualism (yeah, I made that up, what’s it to ya?!), there was more than a flicker of temptation to strip off, light a bonfire in the middle and smear my face in handfuls of charcoal and glee.

Lying on the couch as I write this, reading my scribbled notes from my visit and looking at the images as I load them into this article, it’s going to be hard to clearly recount the energy and the intensity packed into the artworks of this show. It’s going to have something to do with personal taste, of course, as I felt Christopher Wool, Aaron Curry and Albert Oehlen with me in the space. I remember borrowing a book on Oehlen and taking it to the cafe to read where I suffered through heart palpitations in excited torment and joy. Hollenbach resurrected that sensation with an urgent clambouring of haptic surface actions. Everything felt heightened by touch. Like frictional heat from the artist’s hand was still emanating from every piece.

The concrete totems on the floor are born of tombstones, car park bollards and Orkney Island rune stones. Imprinted, sprayed, moulded – game pieces and position markers. Marks! Everywhere marks. Lines that trailed and lines that dripped. Lines cutting their way through plywood strips. Brush strokes, spray rays and scissor slices. Chaos surging the onward impetus while the artist clutches eagerly to the steering wheel, deftly maneuvering between the pitfalls of the abyss.

There’s primitivism at play, with tribal masks and hints of the ancient and archaic. But then there’s the reflexive interplay of cross-cultural referents and a mashup of co-mingling medias. Prints slam up against paints slam up against ceramics slam up against photography. But this is slam as dance. As ritual. Collage gives way to hybridity and falls apart again to materiality.

An urban tone is evident as the materials converse freely with the concrete floor, the white painted bricks and the graffitied laneway outside the window. The pieces all seem to hold themselves together with an internal logic that stabilises the frenetic vibrations of which they are made. Even the paintings, less materially componential (yeah, I made up another word, this show demands it) than the sculptures, feel like they are haptically charged and physically present. The canvas is part of the picture as much as the paint.

I loved this show – it was punchy, take-no prisoners, pack-it-full-of-pith-and-vinegar kind of stuff. One of the rare times when a magazine page sticky-taped to a slathering of paint on a screen-printed semi-abstraction mounted on ply really feels justifiably articulated. You should totally check it out.

_ officially i can’t have favourite artists. but, on a day like today, i think it’s only right to share the work of someone who raises my heartbeat and energises my mind. one of the best painters on the planet right now – Daniel Boyd @d_a_n_b_o_y_d _ i live on Taungurung country and work on Dja Dja Wurrung country. i have all manner of biased privileges and find it impossible to celebrate a day like today, in the way our nation has been. i honour the history and continuing culture of the first australians though. and will prioritise that awareness on this date until we find a way to move forward by acknowledging the past
_ ol’ mate Ross comes from northern England via study and residencies in Germany and Japan to carve a niche in the creative hotbed of talent that is Kyneton, Victoria. he produces triennials, runs businesses, works freelance, draws and paints every day, trains old curators into improved physical strength ... AND ... has a solo show at Bendigo Art Gallery in March . @rossptaylor_ . 🚀 _ Field Notes opens 28 March @bendigoartgallery
_ Maurizio Cattelan ‘La Nona Ora’ 1999
_ in the 1990s i studied economics at monash, a heartland for friedmanesque trickle down theory and encouragement to manipulate markets with newly developing financial products and marketing methodologies. in the search of growth and profit and return on investment and earnings per share. what everyone who studied economics knows is that there are costs that are not appropriately attributed to production costs. the most obvious example is pollution. the waste spewed into the environment from product development is a cost that should be included in the budget calculations of economic actors. the progressive line is to find ways of doing this. it will mean higher prices for things that used to be cheap. the conservative line is that you push that cost on to other actors. reduce costs, increase profits, fuck the other idiots in the system, that’s their problem. this chart shows the hazardous air conditions in Melbourne on 14 january 2020. today the city will be less productive and generate less economic activity because of haze that comes as a consequence of our mining activities and other destructive environmental practices. this is my family and my friends and my arts community paying a production cost that was forced on them by companies and governments pushing their costs downstream. australia’s economy will drag as a consequence of these fires. we will tip toward recession and the rba will cut interest rates to us-post-gfc levels. for a government proclaiming to care about sound fiscal management, this reads like hypocrisy. our prime minister is internationally famous for bringing a lump of coal into parliament as a joke. ask yourself who, or which organisation, walked into his office in that building with that lump of coal in a bag and gave it to him. systems have aesthetic qualities. you can feel their beauty and their logic and their weaknesses. ecosystems exists in cultural contexts. our bushfires are also our economy.