Two landscapes stare each other down across the room. A third stands as referee between two competing teams of portraits. They’re all playing to different rules and while there’s pandemonium on the field there’s choreography in the chaos.

Stephen Giblett’s Kill Switch is filtered surface and morphing form. Shaking off the psychedelic referents and pressing the polaroid defocus button it is painting as light effect as screen dissolve. I can’t begin to explain why but I’m feeling 1970-80s American photorealism in a painting without mimetic intent because there really is only surface play, where colouration competes with itself to elude to form. But there’s enough of a hint of place to evoke landscape, a polarise-effect party horde at the gates to a state house.

At the opposite end of the room, clarity of landscape reveals every leaf in the darkened forest scene of Shannon Smiley’s Untitled. Striving upward growth fights its way forward of the looming dark decay in the shadowy depths. Dualities continue in the battle between the tugging embrace of nature’s comfort and its repelling gloom and spiked foliage. A flicker of fragile colour glides defiantly across the rich black oily gloss of the painted surface.

Grant Nimmo’s Heartbreaker holds court in the centre of the room as fulcrum to the landscapes. Painted more freely it retains a more energetic feel, as if urgently composed with texta-pens under the driving compulsion of a focused distraction. A flowery field of summer is interlaced with floating ying-yang symbols and a cloned smurf who blindly marches on bearing the invisible baton of lost hope.  This is utopian desire for an embrace of nature lost to a New Age whimsy and our commercialised childhoods. The repeated image of the smurf reinforces their own paradoxical sense of individualism. Sure, each one is somehow what they do, defined by their job or maybe their dominate character trait, but they will always also be an amorphous mass of units lost to the communal whole. Curiously, there’s unpainted areas the size of a lozenge or a pill scattered throughout the piece. It’s tantalisingly compelling. A sequence of absences in a fury of painted energy. Portal points to an inner space, scattered on the open field.

Two turkeys are pondering something in Tim McMonagle’s That’s the Style, Mary (turkeys). A puff of thought bubble above each head. What are they so huffy about? Maybe the porn homage next to them, but we’ll get to that. They’re equal parts Egyptian hieroglyph and ornithological sketch. They are dressed in their plumage, each one distinct like the male and female examples of their particular species. The paint is like dirt and mud, scratched and splashed, but with clear dexterity. This gives it a primal, ritualistic feel, and the notion of sacrifice springs to mind. Did you know that Ben Franklin wanted the turkey as the state symbol for the United States? Feels right to mention that here for no clearly apparent reason. Perhaps because Tim has empowered these turkeys somehow – given them style, grace, and symbolic intent. 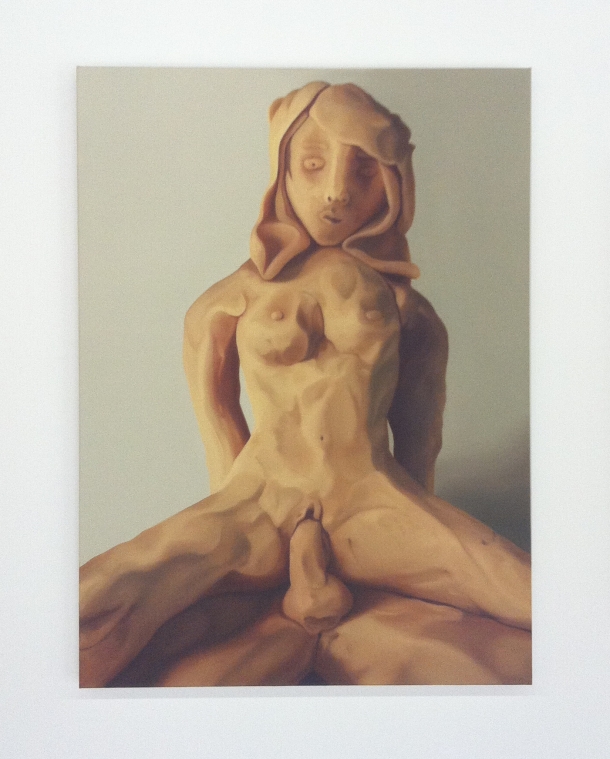 The offspring of Andy Warhol and Marlene Dumas made babies with a de-digitised Julian Opie and found its way into the gallery as the work of Fiona McMonagle, who is able to bring to the fore a sense of humanity with the most minimal of brushwork. Bleeding edges hint at dissolved identities awash in transformation, amplified by both the titles (AKA1 and AKA2) and the hinted ‘before-and-after’ coupling of the portraits. ‘Also known as’ implies the alternate identities of criminals, creatives and heroes. But the question of which is which and who is who drives you to look in vain for clues. And then you start to wonder what would constitute a clue in the first place – what facial characteristic is going to differentiate a villain from a hero?

I kept staring at Kirsten Turner’s Mimir thinking about how nicely painted it was and couldn’t understand why it wasn’t doing anything for me. It’s just so … well … classic. The subject looks like a Greek sculpture come to life. He’s a chunky masculine man, with hands that would tear snakes in half, only he’s doing something weird with his beard. But then I found that I was still staring at it, still pondering it, for really quite some time. I couldn’t leave it alone. Which just made me like it and be damned with the confusion. There’s sepia nostalgia overlaid with hipster follicle fashion by way of Grizzly Adams and lips that Elizabeth Peyton would be happy with. Mystery hand signals swerve into semaphorical symbolism and I’m trapped in like-land with no discernible justification other than like itself. And sometimes that’s the best place to be in art. Who needs all these convoluted musings in the final dust up anyway.

Which brings us all the way around the room to … argh! … Carrie the Prom Queen by Christina Hayes. Only this Carrie has crawled out of an industrial accident in an Aphex Twin film clip. Or it’s hospital theme night at the formal and Carrie’s come from the burns unit. Smiling through gritted teeth and a face that’s a mask that’s a skin peel that’s a New Idea celebrity tanning-salon nightmare. I can’t even look her in the eyes. She’s that terrifying. And that affective. Better than shrugging my shoulders and going, ‘myeh’, at least it made me feel.

The overriding feeling from the show was that this was a celebration of painting, of painters, and the power of art to make you think about looking. These were all brilliantly, dare I say, crafted paintings and while somewhat of a sampler pack collection, a fine celebration of the medium.