A teepee, a wigwam and a yert walk into an amusement park. ‘Pitch your jokes elsewhere,’ cried the ringmaster, as he receded into a hall of mirrors. Oh art! You ridiculously delicious thing you.

Craft curator Debbie Pryor has put together a wonderful show, full of humour, fantasy, hope and design concerns. Each artist was given a structure with which to work (the aforementioned teepee-, wigwam-, yert-like forms) and the offcuts from the panels were given over to Georgia Perry to build an entrance to the exhibition. This faceted archway is a portal that builds a sense of anticipation. The abstract patterning plays off the chrystalline form, disorienting and exhilarating by equal measure. The bare-boned unfinished backing of the archway, revealed after your entrance into the gallery, declares itself as facade, the power directed to those yet to be received into the space. Once in, well, you’re in. Move on!

And then it’s the eyes. The watchful, captivating eyes. Inside the first structure a black lump sits atop an oak box, like a general at rest after a hard day’s march across new lands. Its eyes peering intently at anyone looking in, somehow both disconcerting and inviting. The tent is a swathe of cloth – as if creamy swirls of frosted icing sugar on a cupcake. Cloud-like lumps mill about the base – as if ice cream scoops. There’s an air of fantasy, of Japanese anime coming to life. Sarah brings the structure to life as a place of congress. A cushion sits in the centre for your audience with the eyes while the subordinate ice cream clouds waft about like minions or courtiers.

The second structure is a monument to utopian ideas. The faceted form is connected, through paintings, to Bucky Fuller’s geodesic domes and the optimism that his ideas spawned in communes that sprung up in the 60s and 70s. Kylie applies an architectural twist through the inclusion of a painting of a tudor (mock-tudor) house inside the structure. The planar forms of the house growing and expanding like cell-division. A dream machine offers the chance to close your eyes and witness hallucinogenic patterns forming in your mind. U2’s Joshua Tree spins on the turntable, evoking desert trips on LSD filtered through commercial FM radio. The collapse of the commune utopian dream marinates the structure in a sad deflation of dreams that have failed. And yet its crisply fresh colours, its sharp lines and knowing referential angles keep hope alive. 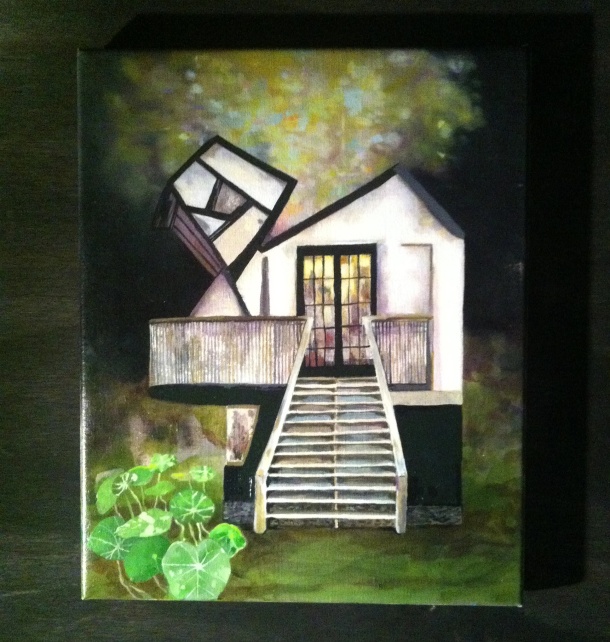 Finally, Terry’s structure sits like a sparkling gem at the end. The painted abstractions on the panels are not far from stained glass windows and I’m half hoping they’ll be saved as individual paintings after the show. They’re captivating. There’s a procession of miniature transport vehicles coming and going from the structure’s entrance – boats, cars, scooters and a soft-sculpture train. There’s a playfulness that is amplified by the objects inside – soft-sculpture domestic objects like a book, a guitar, binoculars, a coffee machine and teapots. Everything is stitched-together fabric off-cuts, a frankenstein homage to recycled parts. The fridge is amazing, complete with operational door and a freezer tray that folds out. A dark edge ripples through the space, like a flickering shadow, as you realise the objects in this space are perfectly befitting of a survivalist’s refuge. This is the last safe-haven for a post-apocalyptic event. Just what are those miniature cars and trucks and boats and trains carrying in and out of here? Hope and despair?

The three enclosed structures represent distinct voices channeled through equivalent devices. Enframed by the mood set by the archway, the show is choreographic in nature and beautifully weighted. As you go back through the gallery again on the way out, the cross-references begin to fire between the works. If Terry is post-apocalyptic survivalist, is he the consequence of Kylie’s utopian ideals collapsed into chaos? If Sarah is all conquering fantasy, is her lumpen black general the residue of Hollywood entertainment commandeering imagination? If exhibitions are portals of space and time, can an art-fan get sucked into his own blackhole?

_ reticent to run a dali image on my feed ... but bear with me the elephant is no longer just in the room, it’s stampeding across the landscape. our surreal world of fire and ice and dust clouds and floods. talk now turns to ‘green swan’ events. remember that term see ... it makes sense in a dreamlike fugue
_ Maurizio Cattelan ‘La Nona Ora’ 1999
_ in the 1990s i studied economics at monash, a heartland for friedmanesque trickle down theory and encouragement to manipulate markets with newly developing financial products and marketing methodologies. in the search of growth and profit and return on investment and earnings per share. what everyone who studied economics knows is that there are costs that are not appropriately attributed to production costs. the most obvious example is pollution. the waste spewed into the environment from product development is a cost that should be included in the budget calculations of economic actors. the progressive line is to find ways of doing this. it will mean higher prices for things that used to be cheap. the conservative line is that you push that cost on to other actors. reduce costs, increase profits, fuck the other idiots in the system, that’s their problem. this chart shows the hazardous air conditions in Melbourne on 14 january 2020. today the city will be less productive and generate less economic activity because of haze that comes as a consequence of our mining activities and other destructive environmental practices. this is my family and my friends and my arts community paying a production cost that was forced on them by companies and governments pushing their costs downstream. australia’s economy will drag as a consequence of these fires. we will tip toward recession and the rba will cut interest rates to us-post-gfc levels. for a government proclaiming to care about sound fiscal management, this reads like hypocrisy. our prime minister is internationally famous for bringing a lump of coal into parliament as a joke. ask yourself who, or which organisation, walked into his office in that building with that lump of coal in a bag and gave it to him. systems have aesthetic qualities. you can feel their beauty and their logic and their weaknesses. ecosystems exists in cultural contexts. our bushfires are also our economy.
_ now here is a stupid irony. because of smoke haze from bushfires that are a thousand kilometres away, and are absolutely and directly influenced by burning coal that we’ve ripped out of our own continent, our solar panels are delivering sub-optimal energy generation. and because of that, we’re having to draw more on the power grid, which uses the coal that contributed to the cause of the haze. there’s tens of thousands of homes being forced back on to the use of coal, likely worth millions of tonnes of emissions, just because of the smoke haze across the continent. the idiocy is as vicious as the cycle we’re spiralling in