Exposure. The very nature of photography is defined by it – the opening of apertures to regulate the amount of exposure to light. Jeff Wall’s photographs are testaments to exposure. It’s a pleasing partnership between medium and meaning. Running like a thread through the work in the first section of the show is a focus on uncovering, revealing and exposing – of stripping back facades and entering into what lies beneath, or behind. Whether a hole punched through a wall in Pipe Opening (2002) or a door ripped off its hinges in the Destroyed Room (1978), we see through the first space presented to us. The fabric of a place’s construction is opened for us through torn plasterboards, smashed windows, opened doors and exposed insulation. This has the effect of revealing to us a facade, the fabricated nature of a constructed tableau. There’s a nice tension because the images read firstly as very articulated constructions, often expressing the language (and certainly the presentation) of advertising and fashion photography. On occasion Wall quite literally tears open the construct to reveal more. On other occasions he allows a streak of light to enter from out of frame, the crisp white shirt-sleeve cuff of a figure drawing attention on the edge of frame (as in A woman and her doctor, 1980-1), or wardrobe doors flung open and powerpoints pulling out of the wall (as in Polishing, 1998). 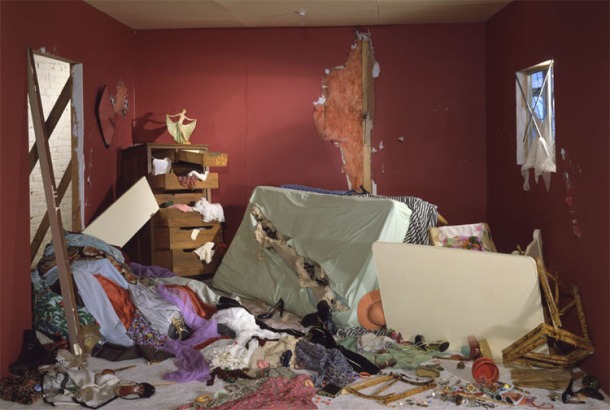 Through into a larger gallery space we are amongst a suite of works that are more realistic in nature. The subjects seem less posed and more intent on their activities. There’s an implication of repetitious tasks performed amongst a multiplicity of objects: from household chores in a cluttered, yet homely harbourside flat in A view from an apartment (2004-5); to preparing chickens in a large and dusty, suburban-style shed in Dressing Poultry (2007); and famously for Victorians, untangling masses of blue, white and brown rope lengths in Untangling (1994). They all speak of human endeavour, of the magnitude of human labour and of the persistence of dedication to a task.

In the third space (of four used for the exhibition) the work centres around natural contexts – mountains, open fields, urban trees. The largest work is A sudden gust of wind (1993)which is an image that has stuck with me since I first saw it in Liverpool ten years ago. It sits somewhere between advertising, theatre, documentary and fresco painting. This is the oddly liminal zone that much of Wall’s work seems to be located in but this particular image most tenaciously occupies this territory. It should be said that this is an image based on a Hokusai print from 160 years earlier, reflecting Wall’s interest in the constructed nature of his image construction.

In the final space, the only room for which transparencies on lightboxes are not used, an odd assortment of images have been brought together, making it the least thematic of the show. A tension between the images doesn’t quite work, feeling more like a mixed bag than a considered inter-relation. After three rooms of illuminated works, these photographs feel flat at first viewing, and less dynamic. But liven up as your eyes reset and adjust to take the works in on their own terms. Perhaps ironically, perhaps not, the work that stands out the most in this room is Night (2001) – a black and white, dark image that looks as if it was rendered in charcoal. A broad expanse of pooled water sits on concrete, sucking up what little light plays across the urban scene. The sad figure of an apparently homeless woman stares out, her face fraught with anguish, sitting in the left of frame amongst the blanketed and sleeping bodies of her companions. 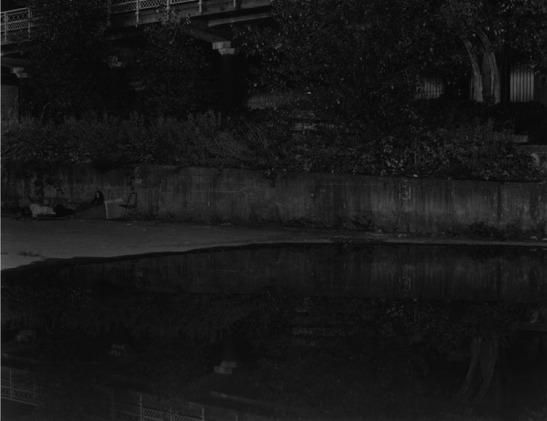 Wall’s images have been presented with enough space to allow them to command their own presence. They are works they demand space, demand contemplation, as if they are allegories calling upon the viewer to decipher the code of compositions and object placements. There’s a strong sense of single-point perspective, as one would expect with photography, but in this case amplified in an echo of Renaissance painting. Throughout, subjects are engrossed in their own actions and we become obvious and expected voyeurs to the scenes. In this case, quite happily so.