There seems to be a growing trend of new shops that combine fine art elements with more design and craft oriented elements. The general underlying impetus appears to be a breaking down of the hoity toity highbrow air of the fine arts, together with a greater appreciation of the things that are locally made, hand-crafted and more ecologically sound (as a sort of contrasting balance to the thousands of ship containers full of imported, cheap, mass-produced items that pour into our newly dredged port from countries with suspect labour practices). Re-approaching the hermetically sealed, library nature of the fine art gallery scene is a very good thing. There’s definitely still a place for some of the white-cubery, in museums and contemporary galleries, but the broader distribution of art is generally more beneficial to both producer and consumer. 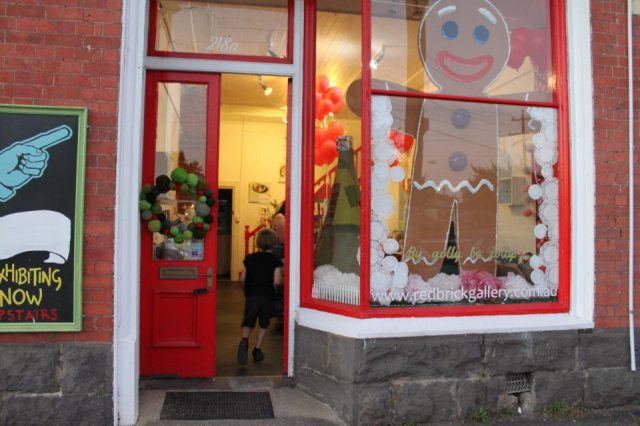 Red Brick Gallery in Ballarat is a venue very much in this vain. With a more traditional, high-street shop front on the ground floor, and a dedicated art gallery space upstairs, it allows the art to maintain a sense of ‘special’ quality (without fear of being tainted by the consumerist edge that concerns many purist artists) while also contextualising art as a necessary and important part of our daily engagements. That’s the tricky balance – articulating the power of fine art, and its inherent magical qualities that appeal to the soul, with a desire to bring that same art into the normal operations of our lives.  Red Brick, for its part, has a functioning division between the ‘art’ and the ‘craft’, in an upstairs/downstairs separation of spaces, but there’s a cross-bleed of the categories that allows for each to co-mingle, co-exist and even more importantly, to co-mmunicate. The art is also in the shop and the shop is also in the gallery. And it works.

The exhibition I dropped in to see was a group show by Amy Tsilemanis, Louisa West and Steph Wallace called ‘Wings Like Blank Pages’. Steph is one of the proprietors of Red Brick and I had a wonderful chat with her when I visited – which no doubt added to the welcoming vibe of the venue. Louisa West was one of the stand out artists from the Ballarat Uni Grad Show and her work was featured on Golden ArtNet at the time. This was another opportunity for her to air her body of work (together with some folded page books, which brought to mind the book sculptures of Melbourne artist Nicholas Jones) and the placement of her paintings in the lower level shop, leading up the stairs to the gallery, was a clever curatorial move as it brought the more ‘fine art’ work down into the mix of the shop and was the major driver in ensuring that cross-bleed effect mentioned above.

On the top landing area and the entrance area of the gallery proper was Steph’s own work. Expertly produced paper-cuts of intricate design blended storybook illustration, templates for Japanese fabric prints and even a sense of tattoo design. Text is interwoven with image and a very pleasant balance achieved, while also having a dynamic feel to the works. Some works were presented on a table and laid out much like one would find in a shop or craft fair. This brought a sense of the market place into the gallery and even hinted at that most art-wanky of current theories – relational aesthetics. But it did so without pretense or vulgarity.

And then there was the work of Amy Tsilemanis. There was something quite overwhelming with Amy’s work, and more than just the simple volume of the work. On one side of the gallery was an old desk covered in artifacts. In the centre of the space was a mannequin covered in attached notes. On the large wall was a cluster of photographs, notes, flyers and objects. Surrounded by these pieces you got a feeling you had somehow crawled into the inner chamber of the artist’s mind. This was like finding yourself in the archival library room of someone’s subconsciousness, with histories both external (of the town and location) and internal (personal). And composed with an obvious dedication and thoughtfulness both on the wall (in 2D) and throughout the space (sculpturally in 3D). This clustering of elements brought to mind the molecular structure of chemical compounds. The gravitational pull of energies, electrons and protons and neutrons all pulling and repelling into patterns of configuration. It was this sense of energy that gave the room a palpable feeling of dynamism. Of being inside a sort of psychological department of events.

As a form of art this accumulation of objects, personal histories and artworks, is in good company: like, say Jason Rhoades – without the neon, or Mark Dion, and even harks back to Marcel Broodthaers. Amy is able to provide this open invitation into her life, a life thoughtfully arranged, without you feeling invasive or disconnected, which is rare in these sort of displays. In fact there is an invitation to participate in the works through notes, ‘Please re-arrange me’ encourages the audience to mix up the objects on the desk, and a set of headphones on a chair for you to sit on and listen to ideas about interventions in railways. This reference to trains and stations was a recurring motif across the work and echoed the external and personal history effect. Direct connection with the environment of Ballarat is made through the arterial flow of its transport infrastructure (external history) and the idea of stations reflect personal milestones and decision about pathways in one’s own life and personal journeys.

Unfortunately I caught the tail end of the show’s run and it’s over now. So if you missed it, you only have my meandering wafflings about it to go on. But I’d say keep your eye on these artists and on Red Brick, and check out what they’re showing in 2012.