Tara Gilbee, You Must Remember This 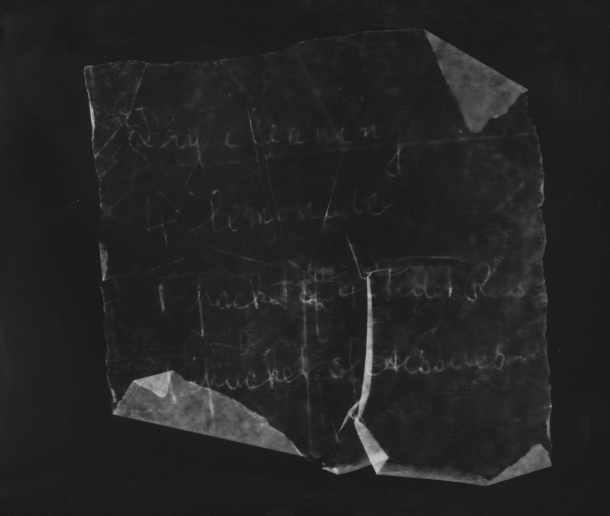 Inscribed by time, marked by history and floating in a blackened void of implied vastness, Tara Gilbee sets before us a collection of gathered artefacts. And not unlike icons cast up on the walls for us to decipher in an exchange of give and take, these images are conduits of transfer. They provide us with hints of their utility, with fragments of text, words and scribbles that imply a proscriptive intent – they are guides. But they don’t give us enough. They are like a rosetta stone or a broken code to be translated through a process of gap filling. Who wrote these, why did they write them, and where are these people now? Only the invocation of the vast void within which they now flounder can offer recourse, if any, as we project our own histories into the well.

This is forensic grappling. The documented nature of the original artefacts, photograms of lists and notes collected by the artist over time, give the images a sense of focused inspection. Light has been poured over scraps of paper, reacting with the film below, and leaving an indelible imprint of the materiality of the original. These are shadowed reflections. A once important task, a fleeting significance, now monumentalised here as a granite asteroid. 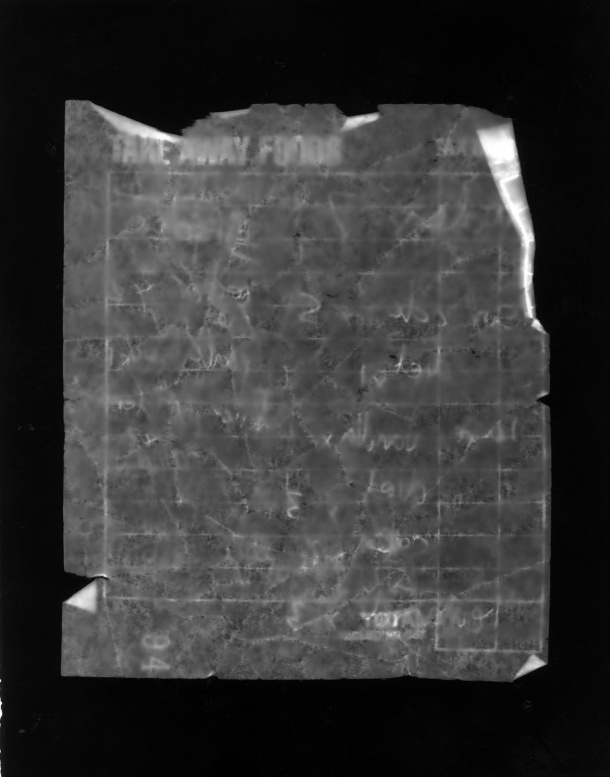 The rich blacks, deep and heavy, envelope the space and create a still and silent ambience. Not unlike a library or secret archival storehouse, the works hush the space. The granite and marble textures of the captured notes read like tombstones and reinforce a sense of reverence. Floating and drifting like weathered leaves or planetary palimpsests. Fleeting and ethereal paper, fragile and transitory, chiselled into solidity and structure.

Time spent in the space is rewarded with a fluctuating and oscillating sense of slippage. The works walk a tense tightrope between figuration and abstraction, between minimalism and complexity, and between dynamism and stasis. As soon as you grasp one aspect, the other creeps in to take over – only to slip back away again. What at first appears to be a set of black and grey abstract patterns, not unlike Rothko paintings stripped of colour and materiality, and rendered in flattened photographic prints, suddenly emerge as clearly documentary images of actual things. But just as quickly as that transition is made, they slip back into abstraction, and the mind grapples with other interpretations of the forms.  The flatness gives way to depth thanks to the unfocused sections of the photograms generated by the folds in the original notes. The scribbles flip between random markings and legible text.  All this within an invocation of the universal sublime.

I hope you enjoy this series of works as much as I do, and that you find your own rambling meanings amongst the beautiful imagery.